NEW YORK — World leaders and senior representatives came together today for the first-ever High-Level Meeting on the Fight to End Tuberculosis at United Nations headquarters in New York. At the meeting, heads of state adopted a political declaration with commitments to accelerate action and funding to end the tuberculosis epidemic by 2030. 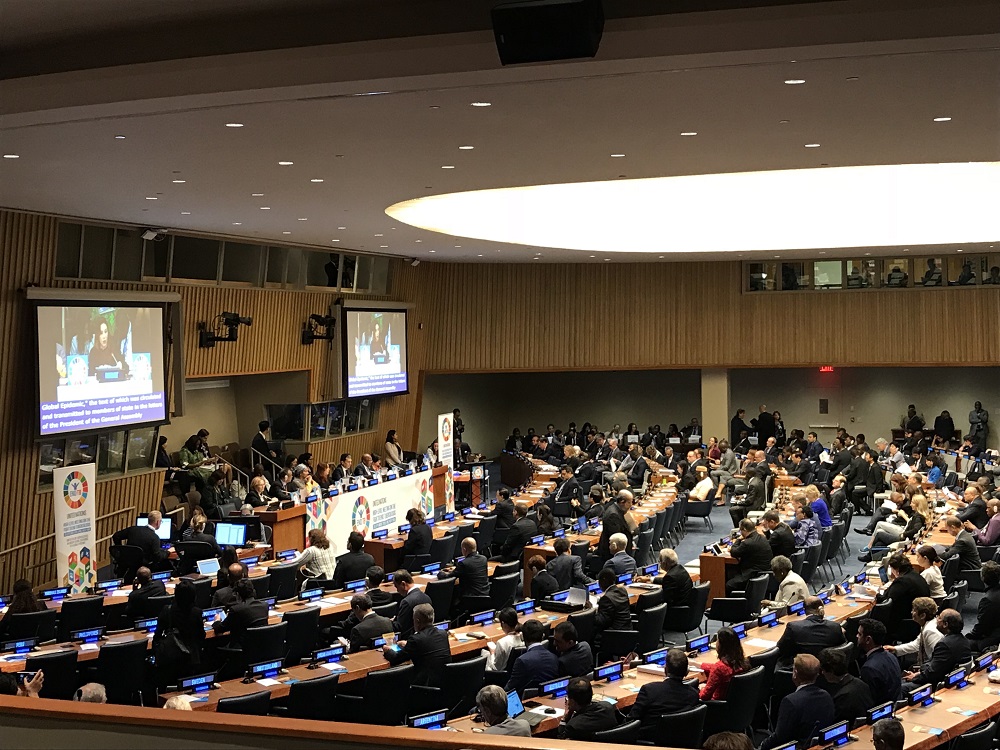 In her opening statement, María Fernanda Espinosa Garcés of Ecuador, president of the General Assembly of the United Nations, noted that ending TB is both a “moral responsibility and a political responsibility,” and that TB is “not egalitarian” in its impact, as it primarily affects the poorest and most marginalized communities.

The declaration sets targets to treat 40 million people with TB from 2018 to 2022 and includes commitments to advance research on drugs and diagnostics, to promote access and equitable delivery of these tools, and to mobilize sufficient and sustainable financing for action to end the TB epidemic.

“Heads of state and government attending this first-ever UN High-level meeting on TB agreed to mobilize US$ 13 billion a year by 2022 to implement TB prevention and care, and US$ 2 billion for research. They committed to take firm action against drug-resistant forms of the disease; build accountability and to prioritize human rights issues such as the stigma that still prevails around TB in many parts of the world,” the World Health Organization said in a release.

After adopting the political declaration on TB at the start of the meeting, Garcés called on heads of state to “move from words to deeds.” Lucica Ditiu, executive director of Stop TB Partnership, a core body mentioned in the declaration, told Health Policy Watch recently that the final document is sufficient in terms of its targets, but it could be stronger on accountability and access to medicines. The partnership co-hosted a private sector TB Innovation Summit the day before, see details here.

Tedros Adhanom Ghebreyesus (Dr Tedros), director general of the World Health Organization, declared at the High-Level Meeting that “this is an historic day in our battle with an ancient disease.” Resonating the uneven impacts of TB noted by Garcés, Dr Tedros explained that TB “thrives where there is poverty, malnutrition and conflict.”

He shared the sobering statistics that TB “killed more than 1.6 million people last year,” and that by the end of the day today, “more than 4,000 people will die” from the disease, “including 300 children.”

In order to succeed in the fight against TB, Dr Tedros said that what will be needed is:

“Now is the time to deliver,” he concluded. “There has never been a better opportunity to make TB history.”

In addition to the main commitments in the political declaration, which focus on increased funding and action on TB, Aaron Motsoaledi, minister of health of South Africa and chair of Stop TB Partnership, added two more. One is that “heads of state should speak spontaneously on TB, without referring to their prepared remarks,” and the second is that when asked if there is enough money to end TB, heads of state should respond with the question: “can we afford not to?”

Bill Gates, business luminary and founder of the Bill and Melinda Gates Foundation, gave the keynote address during the first multi-stakeholder panel of the meeting, noting that there has been progress. “Countries have tripled the number of TB patients since 2000,” he said. Yet Gates also highlighted a major challenge, that some 40 percent of people with TB still remain undiagnosed.

He noted that better tools are needed, including drug and regimen development, as well as new rapid diagnosis tests that are affordable.

“The private sector has the skills to play a key role in this effort, particularly pharmaceutical companies,” Gates said. He also called for increased engagement with private sector health providers, as a key strategy to expand access to diagnosis and treatment.

Gates stated that the Gates Foundation “is committed to claim their part” in the fight against TB, particularly through continued partnership and funding through the Geneva-based Global Fund for AIDS, Tuberculosis, and Malaria.

In his opening remarks, Dr Tedros noted that “the best way to protect [against TB] is to strengthen health systems and recommit to primary health care.” This has been a key theme throughout the high-level meeting on TB, particularly regarding its connection to recent calls for universal health coverage.

During the first multi-stakeholder panel, the representative from the German mission to the UN noted that “it is our shared responsibility to achieve the ambitious targets” that are in the political declaration, and that “without health system strengthening, we will not stop TB.”

He further clarified that “strong resilient health systems are essential in realizing our joint vision as a global community.”

Also during the panel, Khuat Thi Hai Oanh, executive director of Supporting Community Development Initiatives, noted that “maintaining the current efforts will not help to reach those patients that are hard to reach,” those that are “left behind” by current efforts.

“People that are left behind with TB are also left behind in other health matters,” she said, reiterating the need for stronger primary health care systems to address TB and other health needs.

She concluded: “All these material enhancements will not end TB unless they are in the hands of those that need them.”