The World Health Organization (WHO) has named 26 scientists to a new Scientific Advisory Group for the Origins of Novel Pathogens (SAGO), which will take forward the work of the international expert group that led an initial  mission to Wuhan in January 2021, as well as investigating future pandemics.

Six of the scientists are associated with the original investigative mission to Wuhan.  That includes five of the nine original international team members dispatched to Wuhan: Marion Koopmans, Vladimir Dedkov, John Watson, Thea Fischer, Hung Nguyen.  In addition, Dr Yungui Yang, Deputy Director of the Beijing Institute of Genomics, one of eight Chinese team members, and a group leader of the original mission, also will serve on the new SAGO team.

They are joined by more scientists from the world’s powerhouse nations, including Inger Damon from the US Centers for Disease Control and Prevention and a leading Swiss biosafety expert,  Dr Kathrin Summermatter. Five Africans are also part of the new group including Kenya’s Dr Rosemary Sang.

Peter Daszak, the controversial president of the US-based Ecohealth, who had been a prominent member of the first WHO mission, was notably absent from the list.  Pre-pandemic, Ecohealth had supported a series of coronavirus research projects at the Wuhan Institute for Virology (WIV), including what critics say was  “high-risk” collection of such viruses – leading to charges that Daszak had an inherent conflict of interest with an mission supposedly tasked with determining how the virus first leapt to humans – and whether it was the result of a lab biosafety or food systems failure.

That first WHO mission yielded a report that was widely criticized as papering over Chinese data omissions. It also failed to carefully consider the hypotheses that the virus might have escaped from the Wuhan Institute of Virology (WIV) that was researching bat coronaviruses – a theory that dozens of experts around the world say remains just as plausible as the theory that the virus escaped somewhere along the food chain – until more evidence is gathered.

A Health Policy Watch search Wednesday evening on the WHO website for the names and affiliations of the original mission team, and their papers, yielded a “this page cannot be found” message.

After being alerted to the error, the correct link url was restored by WHO, which said that the omission had been due to an IT oversight, whereby “English versions of those pages were not republished during a web migration process.” 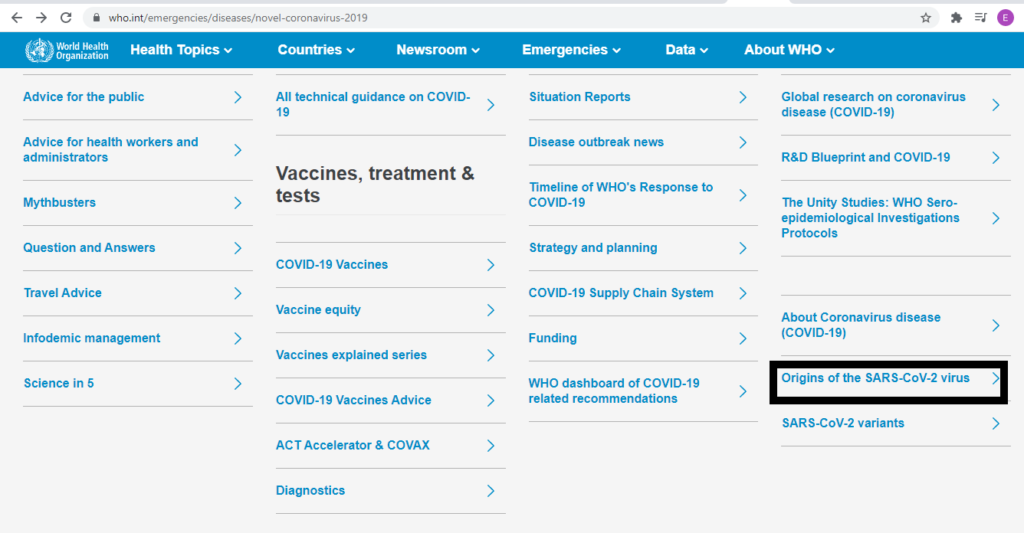 The 26 scientists, selected from more than 700 applicants, according to the WHO, represent a wider range of disciplines than the previous group of only 17 members.  The new group includes experts in epidemiology, animal health, ecology, clinical medicine, virology, genomics, molecular epidemiology, molecular biology, biology, food safety, biosafety, biosecurity, and public health.

“The emergence of new viruses with the potential to spark epidemics and pandemics is a fact of nature, and while SARS-CoV-2 is the latest such virus, it will not be the last,” Dr Tedros Adhanom Ghebreyesus, WHO Director-General, told a media briefing on Wednesday.

“Understanding where new pathogens come from is essential for preventing future outbreaks with epidemic and pandemic potential and requires a broad range of expertise. We are very pleased with the calibre of experts selected for SAGO from around the world, and look forward to working with them to make the world safer.”

SAGO also will advise WHO on the development of a global framework into the origins of emerging and re-emerging pathogens, and on studies and field investigations into these pathogens.

Discussing @WHO's new Scientific Advisory Group for the Origins of Novel Pathogens, @mvankerkhove says that she anticipates that in its discussions about understanding the origins of the current pandemic, #SAGO will recommend further studies in #China and potentially elsewhere. pic.twitter.com/xQvutNHc9o

Whether  or not China will agree is another matter. While Kerhkove said that China has expressed openess to more studies, Chinese officials have repeatedly asserted in recent months that the work of WHO is completed in China and that scientists should instead begin investigated possible sources of the outbreak in elsewhere in South East Asia or Europe. Tensions over the next stage of investigations were further exacerbated after the US administration of President Joe Biden administration tasked its own scientists to explore the theory abut a lab-based virus break – giving what had once been debunked as a conspiracy theory, much greater validity in the public eye.

Dr Tedros painted a bleak picture of northern Ethiopia, warning of “acute malnutrition rates at levels comparable to those we saw at the onset of the 2011 Somalia famine”.

This follows a year-long blockade of Tigray by Ethiopian government forces locked in an ethnic war, which has left up to seven million people facing hunger.

“An estimated 400,000 people are living in famine-like conditions based on the latest UN analysis,” Tedros, who is from Tigray, told the media briefing.

“Since the end of June, we have only had access to Tigray via one road through the neighbouring Afar region where movements are being severely restricted by official and unofficial checkpoints and roadblocks,” he said.

“The UN estimates that we need to bring in roughly 100 trucks of aid a day to meet basic needs in Tigray but since July, the UN has only been able to move 10% of this on the ground,” said Tedros.

Healthcare has almost collapsed as no medical supplies have been allowed into the region since July.