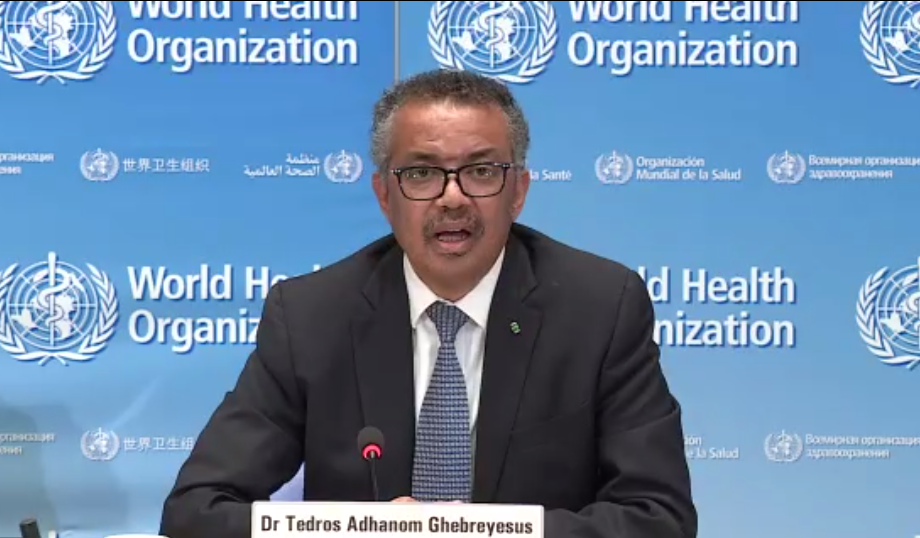 In characteristically soft-spoken tones, World Health Organization Director General Dr Tedros Adhanom Ghebreyesus issued his strongest rebuttal yet to the recent allegations by United States President Donald Trump that the WHO had hidden information in the early days of the COVID-19 pandemic, or failed to inform WHO member states rapidly enough.

Calling upon his own background growing up in Ethiopia where he saw rampant poverty and lost a brother to disease, the WHO Director General declared “we don’t hide information.”

He also warned the world’s leaders saying that they were “playing with fire” by playing politics with the pandemic.

“Don’t use this virus as an opportunity to fight against each other or score political points. It’s dangerous,” he said.

“This is a tragedy which is already affecting many families. So we don’t hide information,” he added, “Because I know what poverty means, I know what war means, I know what killer diseases mean…. This is a devil that everybody should fight, and for that we need global solidarity, cemented in national unity.”

He added that public health experts remain challenged by the lack of knowledge around the virus and this had also contributed to a slow global response: “It’s a virus that many people still don’t understand. Many countries that are very developed, put [out] the wrong conclusions because they didn’t know it, and got into trouble.

WHO has two permanent US government secondees embedded in its operations, added WHO Emergencies Head Mike Ryan, as well as 15 more US experts who have been seconded since the COVID-emergency erupted, acknowledging the “major contribution US government officials embedded in our outbreak have played since the early days of the operation.” Along with those direct scientific links, he said that all G-7 countries have AI-based intelligence systems that pick up signals on new disease threats and outbreaks.

Dr Tedros spoke after a turbulent weekend that saw both strong signs of support for the WHO, in the form of a US$ 500 million emergency contribution from Saudi Arabia, as well as continued backlash from the United States.

The US hand was evident in the squashing of a G-20 statement of support for the beleaguered global health organization at a virtual meeting Sunday of the Group of 20 most industrialized nations. The terse six-paragraph press release that was finally issued  instead made no mention of WHO whatsoever, vaguely referring to “vulnerabilities in the global community’s ability to prevent and respond to pandemic threats.”  A post-meeting press conference was abruptly cancelled by the chair, Saudi Arabia Health Minister Tawfiq Al-Rabiah.

The original 52 paragraph statement had reportedly expressed “concern about the continuity and lack of sustainable funding” of the WHO’s health emergencies programme, according to an unpublished draft obtained by the Guardian. It urged all donors to invest in the fund, saying “it is far more cost effective to invest in sustainable financing for country preparedness than to pay to the costs of responding to outbreaks.”

Addressing G-20 leaders, the WHO Director-General urged industrialized countries to loosen their lockdown restrictions with caution, while continuing funding and producing needed supplies for the global response.  He noted that even as new cases are stabilizing in many developed, they are escalating in many countries with weaker health systems.

“We are looking to the G20 countries to continue to support the global response to COVID-19,” said Dr Tedros, in his published statement, “We echo [South African] President Ramaphosa’s appeal on behalf of the African Union to G20 countries to support African countries with stimulus packages and debt relief so they can focus on fighting the pandemic.

“We call on all G20 countries to work together to increase the production and equitable distribution of essential supplies, and to remove trade barriers that put health workers and their patients at risk.”

WHO Narrative On Taiwan’s Warnings

At Monday’s press briefing, meanwhile, Dr Tedros also sought to set the record straight on one key element of the US allegations – the 31 December email from Taiwan’s Centers for Disease Control, that Taiwanese and US authorities said had been ignored. Although Taiwan said the message had suggested that the virus could be transmitted person-to-person, it was not the first alert about the disease, nor did it specifically indicate that the virus was transmitted via human contact. And it was only one of only dozens of emails that were received by countries requesting clarifications about the first news of the virus spread.

“The one thing that has to be clear is the first email [alert about the novel coronavirus] was not from Taiwan,” he said. “The report first came from Wuhan and China itself – that’s number one fact.”

“The email from Taiwan like other entities, was to ask for clarification,”  he added, noting that it was one of many such queries received from countries. “And they didn’t report any human-to-human transmission.

“So we didn’t receive a report of the existence of human human transmission from Taiwan on December, 31. We have all the documentation, and the emails we received from Taiwan… like other entities, was to ask for clarification. Nothing else. “

On 11 April, the Taiwanese Ministry of Foreign Affairs retweeted its December 31 message to WHO. The tweeted message from Taiwans Centers for Disease Control stated, that “News resources today indicate that at least seven atypical pneumonia cases were reported in Wuhan, China. Their health authorities replied to the media that the cases were believed not SARS; however the samples are still under examination and case have been isolated for treatment. I would greatly appreciate it if you have relevant information to share with us.””

In a follow-up email to media sent 13 April, Chenwei Ku, Assistant Director of the Taiwanese Mission in Geneva said that while the message did not explicitly refer to person-to-person transmission the words “isolated for treatment” suggested that it was a risk.

Moving out of Lockdowns

As many developed countries looked for ways to move out of lockdowns while new case reports stabilized somewhat, Ryan warned that “moving away from a lockdown” means that countries must “move towards something else.”  That includes communities that “understand how to protect themselves and others, and are willing to continue with the physical distancing and personal hygiene measures.”

Testing is another essential element, but along with testing there is a need to train “hundreds of thousands of contact case workers who can isolate cases and do contact tracing,” he added. Effective quarantine accommodations or measures need to be identified for people suspected or found to be ill.

Meanwhile, even if the current wave of outbreaks in the pandemic are brought under control effectively, and a vaccine for the disease is finally developed, the world will still face a massive challenge in delivering immunizations to all of the people who need it.

“We are good at delivering vaccines to children,” said Ryan, but for adults, health systems are ill-prepared.  Ensuring equitable delivery “will require one of the greatest scientific, political, financial and public health operations that we have seen in a generation,” he said. “It must be done with proper stewardship and leadership.”

In developments around Europe, the Swiss-based pharmaceutical Novartis received the go-ahead from the US Food and Drug Administration to conduct a 440-patient Phase III randomized trial of the drug used for lupus, hydroxychloroquine, against COVID-19 disease. The trial, one of the largest to consider the drug so far, will take place in about a dozen sites in the USA. The recently announced clinical trials complements a donation of 130 million doses of the drug by Novartis last month.

We recognize the importance of answering the scientific question of whether hydroxychloroquine will be beneficial for patients with COVID-19 disease,” said John Tsai, Head of Global Drug Development and Chief Medical Officer at Novartis in a statement. “We mobilized quickly to address this question in a randomized, double-blind, placebo-controlled study.”  In addition to hydroxychloroquine, Novartis plans to sponsor or co-sponsor clinical trials to study ruxolitiniband canakinumab – both anti-inflammatory drugs – for hospitalized patients with COVID-19 infections.

Meanwhile, Chinese officials announced they were moving forward with trials for two more vaccine candidates, produced by the Wuhan Institute of Biological Products Co. Ltd., and the Sinovac Research and Development Co – bringing up the total number of vaccine candidates under investigation by China up to 5. In Europe, immunologist Martin Bachmann told Medical News that he hoped his lab at the University of Bern could mass produce enough of a viable vaccine in 6 – 8 months.

Across some 10,000 sequences of the SARS-CoV-2 genome that have been released, the virus appears fairly stable and has not mutated significantly. Thus, researchers can use existing strains of SARS-CoV-2 to develop a vaccine, according to WHO experts.

“The development of a vaccine on current viruses that are available is good,” said Van Kerkhove. “We welcome all work on the development of the vaccine and the as rapidly as safely as possible.”

France plans to triple its testing capacity to 500 000 tests a week by mid-May, said French Health Minister Olivier Véran in a press conference on Sunday. Although France plans to lift its two-month lockdown in mid-May, a complete return to normalcy was far away, French leaders cautioned. Members of the public will ‘probably’ have to wear mask to prevent infections and not all schools will re-open, said French Prime Minister Édouard Philippe. A group of French activists called for an “efficient reorganization” of French trade union Les Entreprises du Medicament (LEEM), which defends the interests of the pharmaceutical industry, in an attempt to improve French medicines production capacity.

In Africa, Chinese billionaire Jack Ma’s foundation sent a third batch of personal protective gear (PPE) for health care workers on the continent,  including 4.6 million masks, 500 000 swabs and test kit, 300 ventilators, 200 000 clothing sets, 200 000 face shields, 2000 thermal sensors, and 500 000 pairs of gloves. The African-based Ecobank said it would contribute some US$ 3 million to governments, the WHO and the private sector to help fight COVID-19.

Since US President Donald Trump gave initial support to lifting stay-at-home orders, protests erupted in at least six states of the USA over lockdown restrictions, including California, Texas, Ohio, Kentucky, Pennsylvania. Michigan was the first to create a massive traffic standstill around the state capitol building, with many protesters carrying firearms with them. “We want to work. We have paychecks to issue”, said one Michigan protester .

Speaking on Fox News, Kellyanne Conway, counselor to US President Donald Trump, said, Americans were saying: “I want to get back to work. The governors have the last word on that, but some have been more concerned about controlling the population rather than protecting them,” she said, adding.  “Some of these governors have physically distanced from common sense.  In Michigan, you can basically smoke your grass, but not cut your grass.”

In the Western Pacific region, however, Singapore was experiencing the biggest surge in cases in a day since the beginning of the outbreak, with 1426 new cases reported today in a press release from the Ministry of Health. Some 99% of confirmed cases are foreigners with work permit residing in foreign worker dormitories, many of which have been declared “isolation areas”. On Saturday, all work permit and S pass holders in construction sector were given stay-home notice.

A nurse in Tehran reported that Iran’s Ministry of Health gave instructions to report coronavirus-related deaths as ‘severe lung infection’ in an attempt to reduce case numbers. US President Trump also cast doubt on Iran’s and China’s numbers.

Indian Prime Minister Narendra Modi has formed a high level task force to develop a vaccine for COVID-19. It will further enable and speed up international efforts in this direction, announced the Bharatiya Janata Party (BJP) today.

Tsering Llamo and Svet Lustig Vijay contributed to this story.