GENEVA, 11 June 2019— UNAIDS applauds the landmark decision of the High Court of Botswana to declare unconstitutional key provisions of Sections 164 and 167 of the Botswana Penal Code. Those provisions criminalized certain private sexual acts and have led to discrimination and violence against lesbian, gay, bisexual and transgender (LGBT) people in Botswana.

“This is a historic ruling for lesbian, gay, bisexual and transgender (LGBT) people in Botswana,” said Gunilla Carlsson, UNAIDS Executive Director, a.i. “It restores privacy, respect and dignity to the country’s LGBT people, and it is a day to celebrate pride, compassion and love. I commend the activists, civil society organizations and community groups that have campaigned so hard for this moment.” 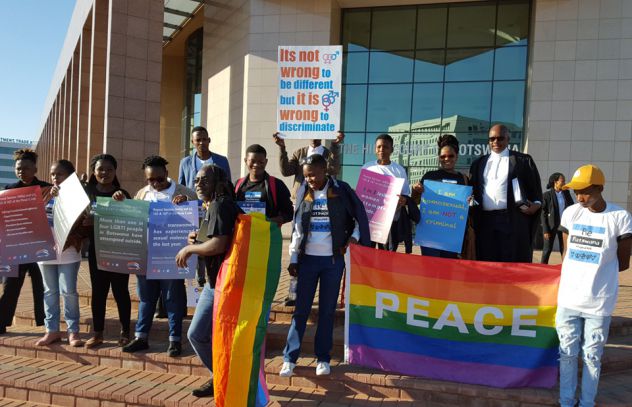 UNAIDS has been working with LGBT groups, civil society organizations and other partners to promote a more enabling legal environment in the country. In recent years, the courts in Botswana have taken a lead in protecting and promoting the human rights of marginalized groups.

Criminalization of consensual same-sex sexual relations is a violation of human rights and legitimizes stigma, discrimination and violence against LGBT people. Criminalization stops people from accessing and using HIV prevention, testing and treatment services and increases their risk of acquiring HIV.

Globally, the risk of acquiring HIV is 28 times higher among gay men and other men who have sex with men than among the general population and 13 times higher for transgender women. Prohibitive legal and policy environments and a lack of tailored services for key populations increase their vulnerability to HIV. UNAIDS urges countries to ensure the full respect of the human rights of all people, regardless of their sexual orientation, through repealing laws that prohibit sex between consenting adults in private, enforcing laws to protect people from violence and discrimination, addressing homophobia and transphobia and ensuring that crucial health services are made available.

“I hope that this decision reflects a move towards a more humane, compassionate and rights-based approach towards same-sex relations worldwide. It should encourage other countries to repeal unjust laws that criminalize same-sex sexual relations and block people’s access to essential services, including to health care,” said Ms Carlsson.

The Joint United Nations Programme on HIV/AIDS (UNAIDS) leads and inspires the world to achieve its shared vision of zero new HIV infections, zero discrimination and zero AIDS-related deaths. UNAIDS unites the efforts of 11 UN organizations—UNHCR, UNICEF, WFP, UNDP, UNFPA, UNODC, UN Women, ILO, UNESCO, WHO and the World Bank—and works closely with global and national partners towards ending the AIDS epidemic by 2030 as part of the Sustainable Development Goals.