With an estimated 1.3 million children working in tobacco fields around the world, Adriana Blanco Marquizo, head of the Secretariat of WHO’s  Framework Convention on Tobacco Control (FCTC), called on lawmakers and the tobacco industry to work hand-in-hand to eradicate child labour and protect children from a variety of hazardous exposures while slaving on tobacco farms.

Addressing a webinar this week, Marquizo said: “Eliminating child labor in tobacco farms and other supply chains should be a matter of urgency since it has denied children the right to education while exposing them to health hazards.”

In addition to punitive laws against tobacco farmers who engage child labour, Marquizo called for legislation that will make it mandatory for all minors to be in school to protect them from exploitation and abuse.

“This is, of course, a health, moral and human rights issue,” noted Marquizo in her keynote remarks at Tuesday’s webinar, hosted jointly by the Stop Project and WHO FCTC.

Child Labour Increases For the First Time in Two Decades 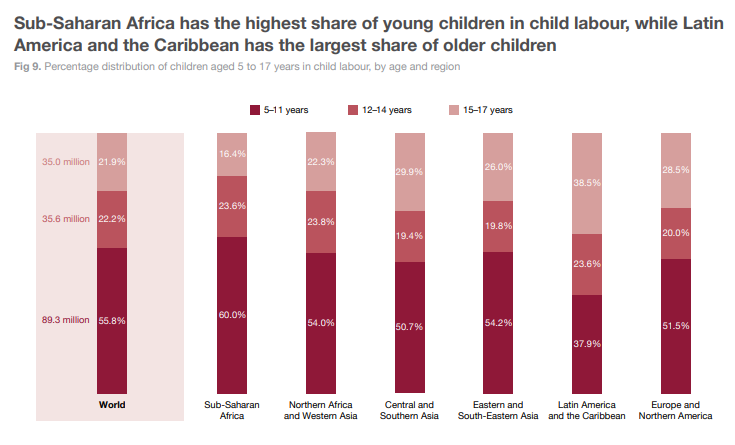 The webinar took place days after the release of a joint report by the International Labour Organisation (ILO) and UNICEF. Issued to commemorate the World Day Against Child Labour observed on 12 June, the report found that one out of 10 children was engaged in labour at the beginning of 2020, while 79 million children were involved in hazardous work including tending to tobacco farms.

It paints a bleak picture of how the number of children forced into labour had increased by over a million in the last four years, reaching a figure of 160 million worldwide. Yet, things are not looking up either, due to Covid-19.

According to Marquizo, the COVID-19 pandemic has forced millions of children to work in tobacco farms in developing countries for meagre wages and in unhygienic conditions. The pandemic threatens to drag another 8.9 million children into the labourforce by the end of next year, according Marquizo.

She believes that raising taxes on the tobacco industry, coupled with financial incentives for poor households during the pandemic, could boost efforts to eradicate child labor.

According to the report, the number of children aged 15 and 17 years working in hazardous work environments has risen by 6.5 million to 79 million since 2016. It also notes that 70% of all child labour – or 112 million children in total – are in agriculture. A 2020 report by the US Department of Labour shows that goods produced by child labour, particularly tobacco, are spread in a number of countries all over the world.

These include Argentina, Brazil, Mexico, Nicaragua in Latin America, and Kenya, Malawi, Mozambique, Tanzania, Uganda, Zambia and Zimbabwe in Africa. There is also  Kyrgyz Republic in Eastern Europe as well as Bangladesh, India in South Asia and Philippines and Vietnam in Southeast Asia.

Rita Surita, from the Oswaldo Cruz Foundation, said children working on the Brazilian tobacco farms are exposed to pesticides that are forbidden in the US and Europe.

“What is most cruel is that these children aged between 13 and 17 years old do most of the hard work. The children are intoxicated by working in tobacco warehouses handling tobacco leaves,” said Surita.

In Zambia, child labour is widespread in more than 20 districts, with children as young as five working in tobacco fields. Tobacco Free Association of Zambia (TOFAZA) executive director Brenda Chitindi said her country has ratified most key international conventions concerning child labour, but children were still forced into working on tobacco farms and were being exposed to hazardous environments.

“Children begin working at the age of 5 years to prepare the seedbed by turning the soil and even felling trees, weed the fields, fertilize the tobacco plants, and spray pesticides without wearing any protective clothing. During harvest of green tobacco leaves, children are exposed to contracting nicotine poisoning,” said Chitindi.

Even worse is the situation in Bangladesh where children are exposed to toxic pesticides, engaged in unpaid labour and prevented from attending school.

Farida Akhter, executive director of non-governmental organisation UBINIG, said for Bangladeshi farmers to reduce production costs, they engage unpaid family members including children. In different stages of tobacco growing, children are exposed to most agrochemicals including pesticides and of nicotine.

“Throughout the year, children work day and night at harvesting time. Two-thirds of children cannot attend school in tobacco growing areas. Tobacco companies continue to purchase leaves that are produced by child labour.”

Poverty is the Driver of Child Labour

Usually, tobacco farmers find themselves in a cycle of debt because they rely on loans each planting season to sustain the practice. They cannot afford to hire farm hands, so they end up engaging cheap labour from children who usually are family members.

And that is why, explained Marquizo,  sections of the WHO FCTC calls for the provision of support for economically viable alternatives to tobacco and for the protection of the environment.

“This is in line with one of the paths of action proposed by the ILO/ UNICEF report,” said Marquizo, whose aim is to solve the problem of child labour in order to achieve Sustainable Development Goals 8.7 that calls for and end to child labour by 2025.

She explained that at national level, raising taxes on tobacco products as per the WHO FCTC could be a source of domestic funding, an approach explicitly recognising the 2015 Addis Ababa Action Agenda.

The tobacco industry often portrays itself as a partner in the development agenda. In 2014, the Altria Group, one of the world’s largest producers and marketers of tobacco and cigarettes, signed a global pledge to eliminate all forms of child labour in its worldwide supply chain as part of an initiative promoted by the Eliminating Child Labour in Tobacco-Growing (ECLT) Foundation. The Foundation itself is a creation of the British American Tobacco (BAT).

Pascal Diethelm, the president of OxySuisse, noted that the ECLT is known to be a tobacco front group whose board is filled with tobacco industry people as opposed to the civil society as required.

This led IUF, a global union of workers to cut ties with ECLT in 2013, charging that it was a corporate social responsibility arm of the tobacco industry. The ILO too followed suit in severing ties with the organisation in 2019.

Mechanism Developed to Help the Transition of Tobacco Farmers.

One of the tangible and concrete ways to help tobacco growers feasibly and sustainably transition to alternative livelihoods, is the implementation of  WHO FCTC Article 17 and 18. The sections of the FCTC  recognises the need to promote economically viable alternatives to tobacco production for those whose livelihoods depend on tobacco production and  calls for the protection of the environment and the health  of those involved in the cultivation and manufacture of tobacco.

The United Nations Development Programme (UNDP), in partnership with the WHO FCTC secretariat, the SDG Fund, Tobacco Free Portfolios, American Cancer Society and the University of Zambia, have developed a social impact bond to help achieve this objective two years ago.

“We targeted specifically small holder farmers who want to transition,” said Dudely Tarlton, a programme specialist in health and development at UNDP.

This will also see an increase of 70% in household resources for those who choose alternative livelihood streams away from tobacco farming. Up to 17,000ha of forests would be protected, which would otherwise have been cleared to pave way for tobacco farming.

But also, the input investment of the $4.9 million will generate outcome payments of $5.4 million. All these are besides the secondary benefits of increased food security, reduction in the prevalence of child labour (crop farming is less labour intensive compared to tobacco cultivation) and reduced incidents of green tobacco sickness.

Already, an impact investor has been identified ready to put its funds to work. “However, we are not there yet, as we still need to identify an outcome funder to link with the impact investor,” said Tarlton.

Once it is up and running, said Tarlton, the social impact bond can easily be replicated beyond Zambia.

Image Credits: U, WHO FCTC.