Some 70% of all health needs can be addressed through primary health care systems based in local communities, and yet the bulk of the US $7.5 trillion spent on health each year goes towards funding care in secondary and tertiary hospital care, which people reach only after they are already very ill, leading to higher costs for governments and households.

This was a key message of World Health Organization Deputy Director General Zsuzsanna Jakab in an address Tuesday evening at the Graduate Institute of Geneva, where she spoke about the challenges facing health policymakers in making last week’s landmark UN Declaration on Universal Health Coverage (UHC) a reality.

“To many countries spend large parts of their health budget on managing diseases in hospitals -where the costs are higher and the outcomes can be worse – instead of preventing them at the primary health care level,” Jakab said.

More than half of the world’s population cannot access quality, affordable healthcare, through primary health care systems, and this is particularly true for preventive services, she said.

But by the time people reach a hospital, they require more expensive and intensive care, she pointed out. Catastrophic health expenses have pushed over 100 million people into extreme poverty, keeping both individuals and whole economies from thriving.

This additional investment is “not just a moral imperative, it’s an economic imperative,” Jakab said, “We must make a crucial shift – from a focus on treating the sick to a focus on protecting the healthy.“

She was sounding a battle cry that is sure to be echoed repeatedly over the coming months and years, as WHO seeks to convince member states as well as donors to finance the billions of dollars in spending annually that health economists say would be needed to attain the ambitious UHC goals.

A 1% GDP increase in spending would infuse approximately US $200 billion a year into primary health services, which WHO estimates would contribute to saving over 60 million lives and addressing the shortfall of 18 million additional health workers needed to achieve UHC by 2030. 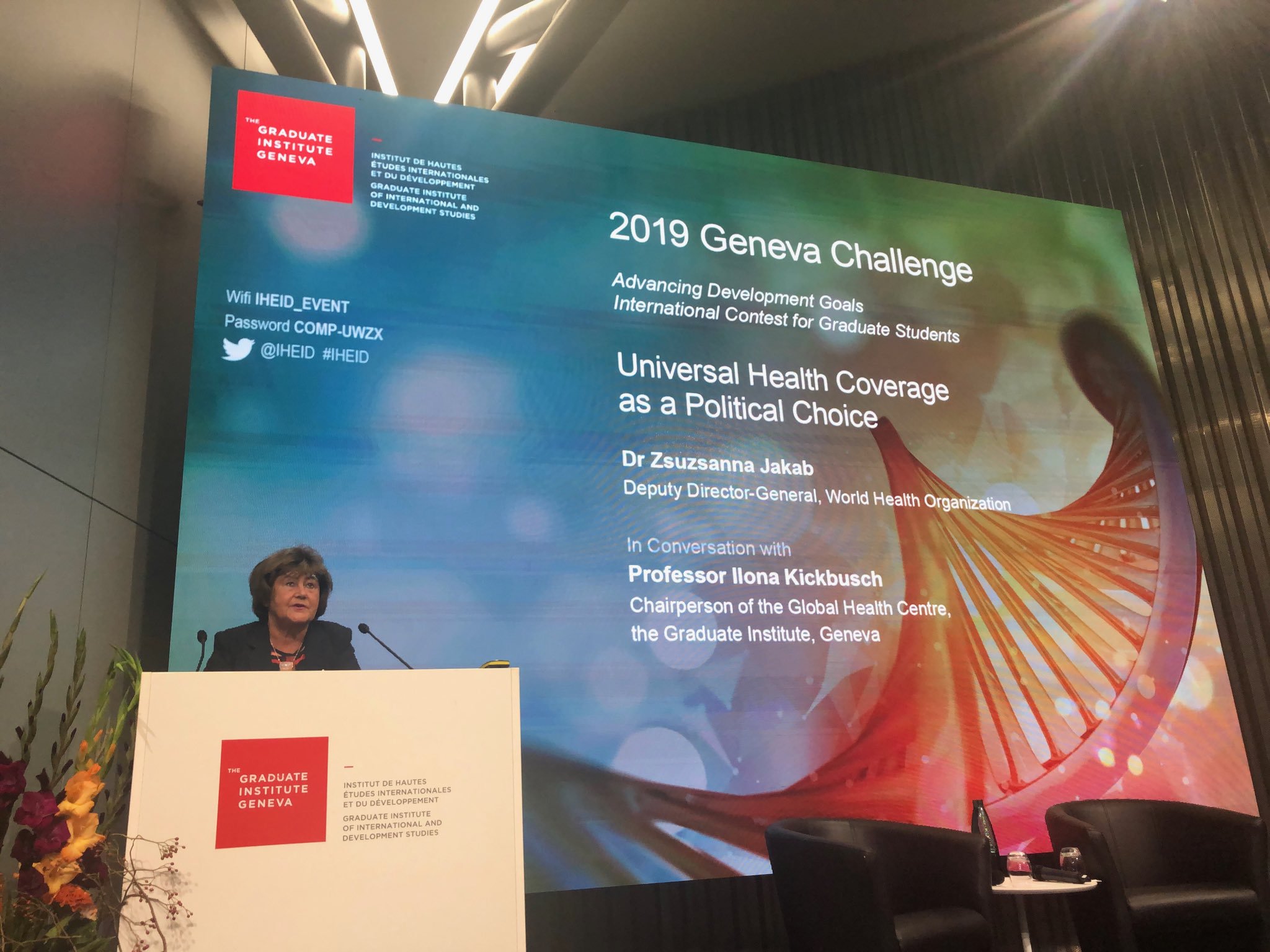 WHO Deputy-Director General, Zsuzsanna Jakab, said health financing for primary care is crucial to the long-term sustainability of health systems, so as to prevent non-communicable diseases (NCDs) such as cancer, cardiovascular and respiratory disease, and mental health disorders from occurring in the first place. These NCDs have become the leading causes of death around the world.

“With ageing populations and the rising tide of diseases that need long-term care, no country can afford simply to treat the people who turn up in its hospitals and clinics,” Jakab pointed out.

Countries that strengthen health spending on preventative and health promotions services, delivered through a primary health care platform, will “not only save lives, they will save money.” The same platform can also be used for integrating “siloed” global health funding from disease-focused programs, “making that money work harder.”

Jakab’s reflections on Universal Health Coverage were made at the awards ceremony of the 2019 “Advancing Development Goals” Geneva Challenge, where five teams of young global health practitioners from five continents were awarded cash prizes ranging from CHF 2500 – 10000 for innovative health projects on research, policy and practice.

ReMedic – an integrative solution turning medicines’ excess into access – the brainchild of Asia’s team, won the first place prize of CHF 10000. The projects, selected and ranked by a panel of judges, all targeted key issues raised in the discussions around UHC, including: care for aging populations, access to essential medicines and safe water, and addressing the burden of non-communicable mental health disorders. The runner-ups were:

An additional special prize, co-sponsored by the United Nations’ Sustainable Development Solutions Network, was granted to the project “Renewable Energy as the Game Changer in Rural Health Crisis: Bringing Advancement in Community-Based Healthcare Facilities in Remote Rural Areas of Indonesia”.

The contest was hosted by the Global Health Centre at the Graduate Institute in Geneva. Established and sponsored by the late Kofi Annan and Ambassador Jenö Staehelin, the contest aims to identify innovative and pragmatic graduate student projects that address key international issues. This year’s theme was identifying solutions to address issues in global health tied to social and economic development.