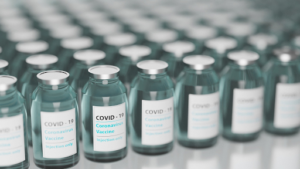 A billion COVID-19 vaccine doses should be reallocated from high-income countries to low- and middle-income countries (LMICs) by September, and of another billion by mid-next year, former President of Liberia Ellen Johnson Sirleaf and former Prime Minister of New Zealand Helen Clark, told United Nations member states on Wednesday.

The pair, who co-chaired the Independent Panel for Pandemic Preparedness and Response which evaluated the global COVID-19 response, were briefing an informal UN plenary meeting on their findings and recommendations.

These include that a Global Health Threats Council is established, the World Health Organization (WHO) is strengthened and empowered, and a pandemic treaty is adopted to guide future pandemics.

“While in some places, vaccines are blunting the worst of COVID-19’s impact, for too many countries, supplies are so limited, and prospects for access pushed so far into the future, that hope is turning to despair,” Sirleaf told the meeting.

Describing the COVID-19 pandemic as “an ongoing disaster”, Sirleaf added that the panel believes it “could have been averted if the countries of the world had heeded the many warnings and prepared their health and surveillance systems – and then when the outbreak began if they had moved together in mutual transparency and solidarity”.

Clark reported that the Panel had found “geopolitical tensions and nationalism had weakened the multilateral system which was designed to keep the world safe”.

“Vaccine inequity is a key factor in the wave of death we’re seeing across Africa, Asia and Latin America,” said Clark.

“It’s astonishing and self-defeating that pharmaceutical manufacturers continue not to share the technology or know-how which could help quickly scale manufacturing. Because of that, we see the temporary waiver of patents under the WTO’s TRIPS agreement as a key tool which should be at countries’ disposal and urge a swift resolution to the protracted discussion on that,” she added.

WHO Director-General Tedros Adhanom Ghebreyesus sent a message to the meeting, which was delivered by Dr Mike Ryan, Executive Director of  the WHO’s Health Emergencies Programme.

“One of the major gaps exposed during this pandemic has been the lack of international solidarity and sharing: the sharing of pathogen data, epidemiological information, specimens, resources, technology and tools such as vaccines,” said Tedros.

Expressing support for the panel’s proposal for a treaty on pandemic preparedness and response, Tedros said: “We need a generational commitment that outlives budgetary cycles, election cycles and media cycles; That creates an overarching framework for connecting the political, financial and technical mechanisms needed for strengthening global health security.”

At the World Health Assembly in May, Member States agreed to hold a Special Session of the Assembly in November to consider developing a WHO “convention, agreement or other type of international instrument on pandemic preparedness and response”, he added.

“We call on all Member States to engage in this process. We must seize the moment. In the coming months and years, other crises will demand our attention, and distract us from the urgency of taking action now.”