More than half of the new cases reported worldwide were still in WHO’s Europe Region, but an explosion of cases in low- and middle-income countries points to a looming health and economic crises in some of the world’s weakest health systems.

“We know that this is much more than a health crisis. We are all aware of the profound social and economic consequences of the pandemic,” said Dr Tedros. “The restrictions many countries have put in place to protect health are taking a heavy toll on the income of individuals and families, the economies of communities and nations”.

Countries around the globe have enacted widespread lockdowns in an effort to slow the spread of the virus, forcing businesses and employers to close or scale back operations. Millions of workers, particularly day wage workers, have lost their jobs overnight.

“This is a crisis like no other, never in the history of the IMF we have witnessed the world economy coming to a standstill,” said Georgieva. “We are now in recession, it is way worse than the global financial crisis.”

Of particular concern are “emerging markets” in developing countries, said IMF’s Georgieva, which are hardest hit and have less resources to protect themselves from both the virus and the global recession. Since the beginning of the pandemic, nearly US $90 billion in capital has left such emerging economies.

“Many countries are facing this dilemma of do they provide support to people to survive, or fight the virus,”  said Georgieva. “We want to fight this false dilemma.”

“The issue of debt in developing countries must be addressed urgently,” she added. The IMF is providing debt relief for its poorest countries through a catastrophic containment relief trust support. Along with the World Bank, the IMF is also calling on bilateral creditors to place a moratorium on official debt payments to provide space for countries to address immediate priorities.

On where the funds should be directed in the short term response, Dr Tedros said that governments should be strengthening the foundations of the health system, paying their healthcare workers and removing financial barriers to care, and setting up social welfare support for the most vulnerable.

The WHO also voiced their concern today about lifting restrictions too quickly, and the importance of developing effective transition strategies as outbreaks in countries begin to dampen. “If countries rush to lift restrictions quickly, the coronavirus could resurge, and the economic impact could be more severe and prolonged”, said Dr. Tedros.

“We don’t want to have cycles of lockdown and release. This is not what anybody needs right now. The way to avoid that is a transition strategy to get ahead of the virus . Like this, we can protect our economies”, said Mike Ryan, Executive Director of the WHO’s Health Emergencies Programme.

COVID-19 infections hit the one million mark on Thursday evening, according to latest reports by Worldometer, an independent digital team tracking case counts by official national and global sources.

More than half of the new cases worldwide over the past 24 hours were still being recorded in WHO’s European region. New cases in Europe totaled 38 809, with Spain, Germany, France, Italy and the UK accounting for almost three quarters of new cases.

As France approached the tipping point in demand for intensive care units, a National Ethics Consultation Committee had established “ethical support units” to “help doctors make difficult choices about which patients with “COVID-19 to treat in intensive care”. A summary of the new guidance was also published in English by the British Medical Journal.

In the Americas, meanwhile, there were 28 161 new cases over the 24-hour period between 1 April -2 April, largely in the United States. As the USA’s numbers continue to increase to almost 245,573 confirmed cases, the Governor of Florida finally bent to national directives and issued stay-at-home orders for state residents yesterday. Overall, almost 90% (290 million people) of the USA’s population scattered across 37 states have received orders to remain at home.

As India witnessed a massive internal migration of laborers from cities to their rural homes in response to a nation-wide lockdown, India’s Chief Secretary of State, Preeti Sudan, issued an order on behalf of the Ministry of Health and Family Welfare, calling on State Governments to provide adequate medical facilities, food, clean drinking water and sanitation for people on the move.

The “anxiety and fear of the migrants should be understood by the police and other authorities and they should deal with the migrants in a humane manner,” stated the order, based on directives issued by India’s Supreme Court.  She called on “all concerned to appreciate the trepidation of the poor men, women and children and treat them with kindness.”

The migration was occurring as South East Asia experienced a 7-fold increase in new cases in just 24 hours (31 March–1 April). Just three of South-East Asia’s 11 countries, including India (2640), Indonesia (1986) and Thailand (1978) account for about 96% of the cases reported in the region so far.

Africa’s cases have also increased exponentially in the past week, according to a weekly bulletin the WHO African Regional Office. In comparison to two weeks ago, new cases have almost doubled in the past week (185%), with three more countries reporting COVID-19 (Botswana, Burundi, and Sierra Leone). Currently, most member states in the WHO Africa region (42/45) have confirmed cases of COVID-19. The African region has exceeded 7000 cases today, says Africa’s Centre for Disease Control. 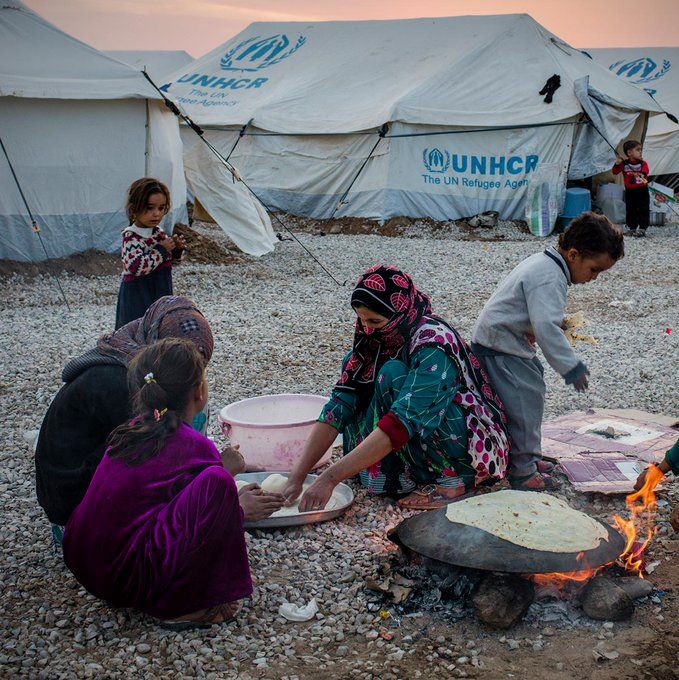 A new strategy called “shielding”, that aims to limit transmission of COVID-19 in migrant and refugee camps, has been proposed by the London School of Tropical Hygiene and Medicine’s Health in Humanitarian Crises Centre.

The strategy recommends that people at high-risk from COVID-19 be identified and separated from other camp members in so-called ‘green-zones’ for an extended period of time, so as to reduce their risks of serious illness and possible death. The zones, ideally, would be located as close as possible to primary health care and other essential services, to minimize their need for movement.

The guidance notes that the kinds of ‘stay-at-home’ orders and self-isolation tactics that have been widely adopted in developed countries are unworkable in migrant camps and camp-like settings. And at the same time, overcrowding, poor access to safe water, sanitation and limited access to health services could also lead to very high rates of infection among camp residents.

In the guidance, high-risk individuals are defined as those over the age of 60, as well as individuals that have low immunity due to genetic conditions or chronic diseases (e.g. HIV) or non-communicable diseases (NCDs) such as high blood pressure, lung diseases or cancers.

“Green Zones” can in fact be established at the household level, for older or weaker family members, as well as at the neighborhood level, or as part of a broader community approach – depending on the characteristics of the migrant camp or settlement, the document suggests.

The guidance document suggests that “social care committees” can coordinate the shielding response and facilitate acceptance of and adherence to the shielding measures.