Deaths from tuberculosis increased for the first time in a decade in 2020 due to the COVID-19 pandemic, according to the World Health Organization’s (WHO) 2021 Global TB report.

The diversion of health resources to address COVID-19 led to fewer TB diagnoses as well as a drop in treatment last year. This is likely to result in even higher TB-related deaths in 2021 and 2022, warned the report, which was released on Thursday.

Over a million fewer people were diagnosed in 2020 than the previous year with the south-east Asia and Western Pacific region accounting for 84 % of the global reductions. India and Indonesia were responsible for more than half of the drop in case notifications in this region between 2019 and 2020.

The most sobering part of the report was its warning that negative impacts on TB mortality and TB incidence in 2020 will be even worse in the next two years, with 2021 forecast to have even higher TB deaths while 2022 is likely to see the biggest impact on TB incidence. The pandemic and lockdowns have knocked TB’s elimination progress to 2012 levels. 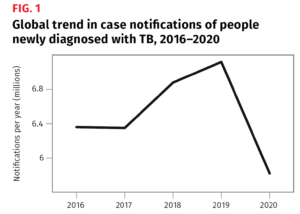 Most 2020 targets set for TB elimination have been missed by almost all WHO regions. The WHO Europe region, which achieved and surpassed most of its 2020 targets, faltered when it came to TB notification and registered a dip in notifications.

The huge drop in reporting and detection of TB between 2019 and 2020 points to a disruption in the supply-and-demand of TB diagnostic and treatment services, the report said. Fewer people were able to get access to resources due to lockdowns and fears of COVID-19, and the healthcare system also took a hit due to the diversion of resources.

The WHO estimates that 4.1 million people who currently suffer from this deadly disease have not been diagnosed or have not officially reported to national authorities. The figure was 2.9 million in 2019.

India and Indonesia had previously been the main contributors to the uptick in TB notifications between 2013 and 2019 when their combined annual total number of notifications increased by 1.2 million in that period. However, all that was nearly erased between 2019 and 2020 when notifications fell by 0.7 million.

According to the Indian Health Ministry’s 2021 Annual Report on tuberculosis elimination, reports and notification of confirmed TB diagnoses tumbled 38 % in March-April 2020 owing to the lockdown. Private notifications were down 41 % for the same period.

At the press conference to launch the report, Katherine Floyd, Coordinator of the TB Monitoring and Evaluation Group in the WHO Global TB Programme, said that India has the highest TB burden in the world. In 2020, some 2.6 million people developed TB while half a million people died – one-third of all global deaths. 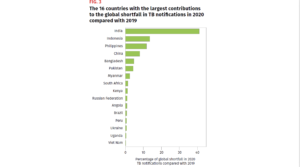 Based on the country-specific models for 16 countries that accounted for most of the global drop in 2020, the negative impacts on TB mortality and incidence will get worse in 2021 and beyond.

The organisation estimated that approximately 1.5 million people died in 2020 from the air-borne disease, the first year-on-year increase in global deaths due to TB since 2005.

The models of prediction for these figures have not considered the economic and nutritional aftermath of the Covid-19 that makes individuals more susceptible to developing TB diseases among those already infected with M.tuberculosis.

How do we get back on track?

“Getting back to the levels that were achieved in pre-COVID times would depend on the key stakeholders, officials, funders and the understanding that these investments and continuation of TB services are needed as soon as possible,” said Dr Tereza Kasaeva, WHO’s Director of the Global TB Programme, in response to a question from Health Policy Watch.

She said that urgent actions and investments are key to address these gaps in TB’s progress and a full recovery of services is essential.

Dr Osamu Kunii, Head of Strategy, Investment and Impact Division at the Global Fund to Fight AIDS, Tuberculosis, and Malaria, said that “we need a global effort to support replenishment of the global fund for next year.”

He added that while the G7 and G20 members are having discussions on pandemic preparedness, we need to remind them that “fighting against TB is also very useful for future pandemic response.” 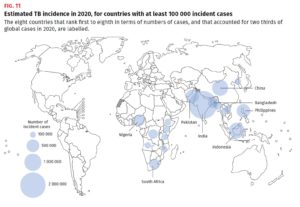 The drop in people enrolled on drug-resistant TB treatment means that the target of treating 40 million people by 2022, which was adopted at the 2018 UN-High level meeting, is far out of reach.

“This is alarming news that must serve as a global wake-up call to the urgent need for investments and innovation to close the gaps in diagnosis, treatment and care for the millions of people affected by this ancient but preventable and treatable disease,” cautioned the WHO Director-General Dr Tedros Adhanom Ghebreyesus.

Increases in both domestic and international funding for TB are urgently required, but provisional data suggest that allocations for 2021 will remain inadequate, according to WHO.

“For more than a year now, we’ve been sounding the alarm over the growing number of people not being diagnosed and treated for TB,” said Dr Lucica Ditiu, Executive Director of the Stop TB Partnership.

“Unfortunately, today’s report confirms what we all feared—that more and more people are dying from TB. We now see more than 4,100 people dying from TB every single day. This is not a prediction; it is a reality. The COVID-19 pandemic combined with low political will and appallingly low levels of funding have reversed hard-fought gains in the fight against this age-old disease.”

The End TB Strategy targets for 2030 and 2035 cannot be met without intensified research and innovation, the report further said.

Tuberculosis deaths rise for the first time in more than a decade due to the COVID-19 pandemic
📌📄Full report: https://t.co/jYMZLIYzv7 #EndTB pic.twitter.com/6dDFTktikU

There need to be more technological breakthroughs by 2025 so that the global incidence rate of TB could be accelerated to 17 % per year between 2025 and 2035. With the 2020 target for TB incidence missed, one will need to make bigger strides to meet the future targets.

“If we had spent a fraction of the energy and money that governments and pharma have spent developing COVID-19 vaccines and then getting them to wealthy countries, we´d have stopped TB in its tracks long ago,” said Guy Marks, President of the International Union Against Tuberculosis and Lung Disease (The Union).

“Instead, these devastating mortality numbers from the WHO Global TB Report indicate TB will return to being the biggest killer sooner than later. And that is a preventable tragedy.”

The report lists priorities to meet the 2025 targets, including a TB vaccine or a new drug treatment for the nearly two billion people already infected, rapid diagnostics for use at the point of care, and simpler, shorter treatment for TB disease.