The United Nations General Assembly held a hearing on 5 July to engage civil society in the preparatory process toward the third High-Level Meeting on Non-Communicable Diseases to be held at the UN in New York on 27 September.

Civil society made many recommendations to the UN and heads of state at the Interactive Hearing on NCDs [pdf] in the areas of scaling up prevention and control, financing, promoting multi-sectoral partnerships, and ensuring political leadership and accountability.

Amid these recommendations, one counter-recommendation to civil society stood out. James Chau, renowned broadcaster in China, writer and WHO goodwill ambassador for the UN Sustainable Development Goals (SDGs) and health addressed the audience, saying, “Civil society, with respect, can you please be a little less civil?”

This call to civil society was contextualized by Chau in reference to the massive civil society mobilizations of the anti-apartheid and AIDS movements of the 1980s that demanded change. Such action, according to Chau, will be needed in the civil society movement around NCDs.

With regard to progress on NCDs, Chau told the hearing, “It’s time to be honest. Since the first HLM on NCDs, not much has happened.”

The Interactive Hearing on NCDs can be viewed on UN Web TV here and here.

While many different perspectives were voiced at the interactive hearing, there was an overall consensus regarding the magnitude of the challenge to address NCDs. “The main types of NCDs are cardiovascular diseases (like heart attacks and stroke), cancers, chronic respiratory diseases (such as chronic obstructive pulmonary disease and asthma) and diabetes,” according to a WHO fact sheet on NCDs.

The president of the General Assembly, Miroslav Lajčák of the Slovak Republic, opened the hearing with statistics highlighting the massive scale of this challenge. He explained that two-thirds of all deaths globally are caused by NCDs, and that cancer, heart disease, stroke and diabetes are killing more people than infectious diseases.

“This is not a phenomenon we must accept, because the fact is, many NCDs are preventable, which means we can take direct action to change these trends, and some of us already have,” he stated.

Lajčák noted examples of such actions including “limits on the use of tobacco, prohibitions on sugary drinks and foods in schools, the building of new cycle tracks in cities, and new campaigns to promote mental health services.” However, he expressed that while these actions have brought about positive results, they are not enough.

He went on to highlight the link between NCDs and poverty, stating that “poverty significantly increases the chance of developing an NCD, and the chance of dying from it. Over 85 percent of premature deaths happen in low and middle-income countries.”

Speaking on the issue of inequality, an academic of New York University expressed concern that the high costs of drugs to treat many NCDs are too expensive for low income countries. “We cannot address the issue of financing for NCDs without addressing the pharmaceutical company lobby and influence,” she said.

A representative from United for Affordable Cancer Treatment (UACT) referenced Chau’s earlier statement that “this is no time to be civil. If you really want to achieve universal coverage and save lives, you have to take some countermeasures to high prices,” which, according to UACT, includes delinking the cost of research and development from the prices of drugs.

Ilona Kickbusch, director of the Global Health Centre at the Graduate Institute in Geneva, raised concern that the current Zero Draft [pdf] of the Political Declaration on NCDs “does not express … willingness to act ambitiously enough, it does not clearly spell out what needs to be done, it skirts around the real issues, and it does not clearly put the challenges both to governments and to industry.”

James Love, director of Knowledge Ecology International, pointed out that “[t]he Zero Draft of the declaration does not cite the crisis in high prices for drugs for cancer and rare diseases, and insulin, and does not address patents or other intellectual property rights, which influence pricing and access.”

He made the additional points that “the political declaration needs to make a reference to the 2001 Doha Declaration on TRIPS and Public Health,” and that it should mention what he described as the “most important reform… to progressively delink the incentives to invest in R&D from product prices.” It also should reference “the need for transparency of R&D costs, prices, patent landscapes and utilization of drugs by country, in order to have better metrics for reforming incentives, identifying access barriers and measuring disparities in access,” Love said. 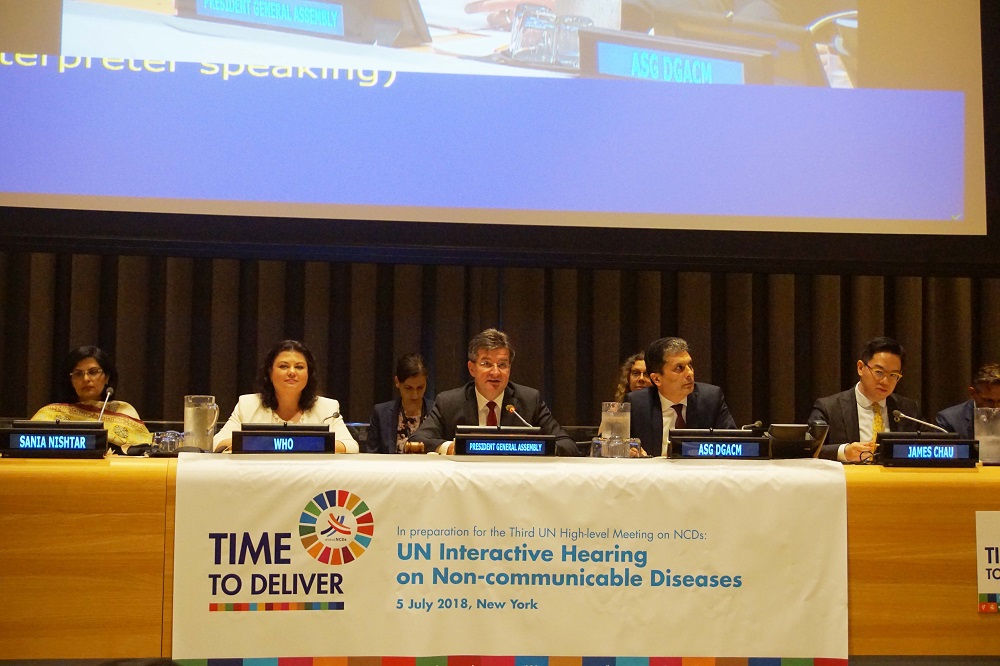 Sebastiano Cardi, the Italian ambassador to the UN, and Elbio Rosselli, ambassador of Uruguay to the UN, co-facilitators leading the intergovernmental consultations and negotiations in preparation for the High-Level Meeting on NCDs, concluded the hearing with final statements.

In response to Chau’s earlier request to civil society, Cardi expressed that he “prefer[s] to remain civil to discuss and engage all stakeholders,” adding, “There is no friend or enemy in this process, and if we embark in a confrontational trend, then we have already lost our objective.”

Rosselli said that the Zero Draft is expected to be finalised within the next three to four weeks. He concluded the hearing by urging members of civil society to lobby their government representatives to ensure that the issues brought up in the interactive hearing are included in the draft.

In 2011, the UN General Assembly met for the first ever High-Level Meeting on NCDs, and adopted a political declaration to shape the global agenda on addressing NCDs. In this political declaration, “Member States made 22 political commitments and called upon WHO to develop a global monitoring framework for NCDs and a global multi-sectoral partnership,” according to an NCD Alliance FAQ [pdf].

Intellectual Property Watch coverage of the 2011 High-Level Meeting on NCDs can be found here.

In 2014, the General Assembly met for the second High-Level Meeting on NCDs to undertake a comprehensive review and assessment of the 2011 political declaration, but “no Heads of State or government attended; instead, six Ministers of Health attended.… adopt[ing] the 2014 UN Outcome Document on NCDs [pdf], which shifted from global to national commitments,” according to the FAQ.

The 2018 High-Level Meeting on NCDs this September will again undertake a comprehensive review of progress, and will set new political commitments to address NCDs and to meet SDG targets by 2030.

David Branigan graduated in May 2018 from the Studley Graduate Program in International Affairs at The New School. His research is focused at the intersection of technology, public policy and human rights.