In a “groundbreaking” trial conducted in Indonesia, lab-grown mosquitoes infected with Wolbachia bacteria reduced the rate of symptomatic dengue infections by 77%, and hospitalizations by 86%, in communities where the bacteria-armed mosquitoes were released.

The three-year study, which was led by the World Mosquito Program, provides compelling evidence for a new method of controlling dengue. The study was published in the New England Journal of Medicine last week.

Dengue is a mosquito-borne viral infection with approximately 100 million to 400 million infections recorded per year. Some 70% of the global burden of dengue is in Asia, where severe dengue has become the leading cause of hospitalisation and death among children and adults.

The incidence of dengue has grown dramatically around the world in recent decades.

Indonesia is a global hotspot for dengue, which is present in all provinces of the country and endemic in many large cities.

Disease modelling studies have predicted that the Wolbachia-mediated blocking of dengue virus infection in Aedes aegypti mosquitoes could be sufficient to eliminate dengue in low or moderate transmission settings.  However, the Indonesia trial is one of the first to demonstrate efficacy in a large population setting.

In the wake of the results of this and other trials, the World Health Organization is reportedly developing recommendations for Wolbachia mosquitoes as a method of dengue control.

The city was separated into 24 clusters. Eggs of the disease-fighting mosquitoes were released in 12 of the clusters every 2 weeks for 18 to 28 weeks – while in the other half of the city the mosquito populations were not treated.

Ten months after the releases began, the prevalence of Wolbachia among the local mosquito population in the treated clusters reached over 80%.

The researchers then studied disease outcomes among some 6,306 people who came to primary care clinics with a fever in the treated and the untreated areas. Of the patients who lived in treated clusters, only 2.3% tested positive for dengue virus, compared to 9.4% of those in control areas.

The incidence of symptomatic dengue cases was reduced by 77% and hospitalizations dropped by 86%.

“This result is groundbreaking,” said Dr Katie Anders, Director of Impact Assessment at the World Mosquito Program. “We think it can have an ever greater impact when it is deployed at scale in large cities around the world, where dengue is a huge public health problem.” 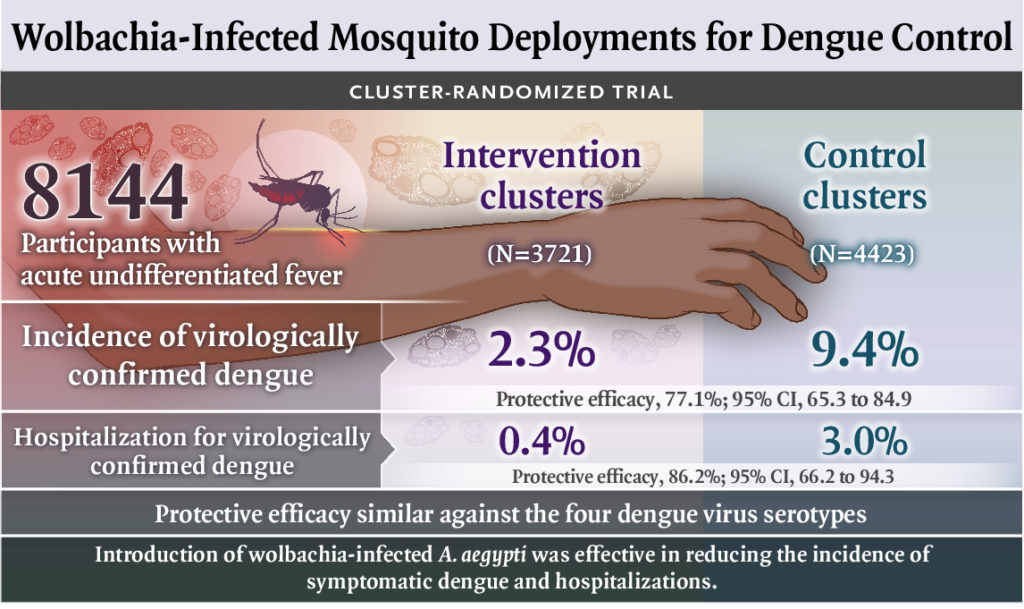 In 11 of the 12 treated clusters, the proportion of participants with dengue was lower than in the control groups.

The efficacy of the lab-grown mosquitoes was similar in reducing incidence of four dengue virus serotypes.

“[This study] provides the gold standard of evidence that Wolbachia is a highly effective intervention against dengue,” said Oliver Brady, a dengue expert at the London School of Hygiene and Tropical Medicine, who was not involved in the study.

“It has the potential to revolutionize mosquito control,” Brady added.

Releases are also now underway in the neighbouring districts of Sleman and Bantul.

Trials are meanwhile also ongoing in Colombia, Sri Lanka, India, and countries in the Western Pacific.

“I am confident that Wolbachia can complement other methods in controlling dengue,” said Rhamawati Ningrum, a study nurse at Puskesmas Health Center. “I expect that this Wolbachia program continues, not only in the city of Yogyakarta, but in other cities across Indonesia.”

According to the researchers, once mosquitoes are infected with the Wolbachia bacteria, the infection is maintained in the mosquito population and doesn’t need reapplication, which makes it a cost-effective strategy for controlling dengue.

The Wolbachia method is also considered to be harmless to ecosystems, as 60% of insect species already carry the bacteria anyway.

The results are consistent with findings from non-randomized Wolbachia deployments in northern Australia and Brazil, suggesting that the results could be replicated in different epidemiological settings.

So far seven million people are under the protection of Wolbachia and the World Mosquito Program aims to cover at least 75 million by 2025 and half a billion by 2030.

Wolbachia has the potential to also be effective against other diseases that Aedes aegypti mosquitoes carry, including Zika and yellow fever.