US President Joe Biden has reaped praise for convening a Global COVID-19 Summit on the margins of this year’s United Nations General Assembly that placed vaccine shortfalls in low- and middle-income countries front and center of GA debates. But it remains to be seen if the big commitments repeated once more this week can break through the glass ceiling of inertia fast enough to meet WHO’s goals of 40% vaccine coverage in every country by the end of this year.

Statements from Geneva Friday by the World Health Organization, the WHO-backed COVAX global vaccine facility, and other mainstream actors reflect that uncertainty between the lines – while those by civil society were more openly critical.

Together, they underline the complex steps that still need to be taken to quickly turn around the vaccine distribution dynamics.

And that includes not only the immediate fulfillment of unmet donation pledges, but also prioritization of vaccine finance for vaccine purchases by low- and middle-income countries, rather than on their behalf, COVAX says.  Infrastruture and IP frameworks to enable more rapid expansion of vaccine manufacturing in LMICs remains a sticking point with equity-minded civil society groups, meanwhile. 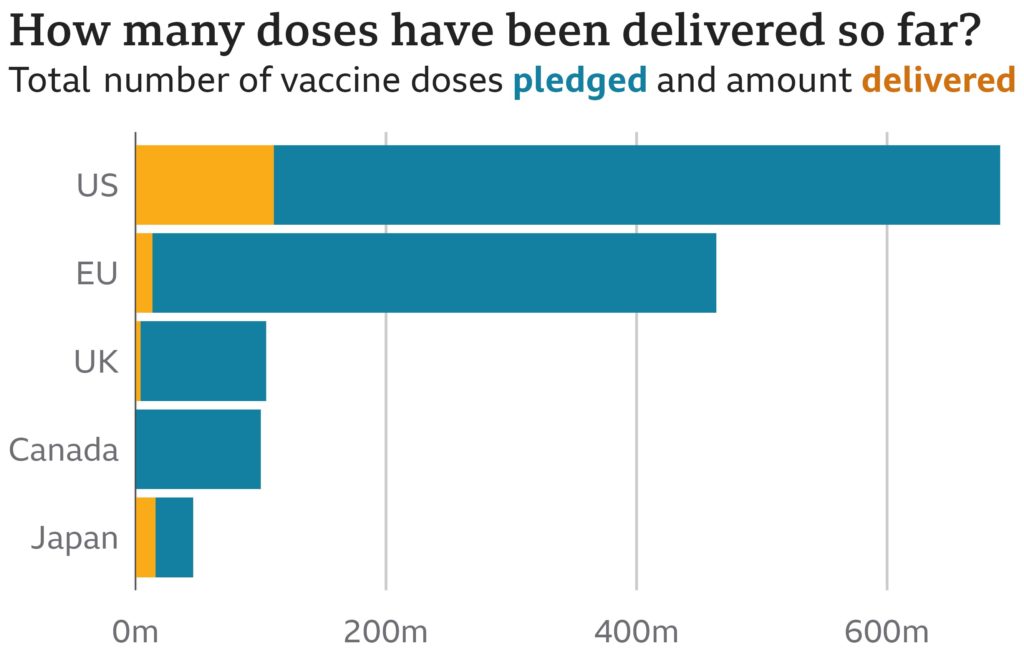 Data released just ahead of the White House COVID-19 summit, Wednesday, underlined once again the waste and lives lost in a business-as-usual approach – including continued stockpiling by rich countries of excess vaccine doses, including 100 million due to expire by the end of the year.

Airfinity’s COVID-19 Vaccine Expiry Report estimates that more than 100 million vaccines are set to expire by the end of the year and need to be redistributed immediately.

Rapid deployment of those 100 million doses to vaccine starved low- and middle-income settings could avert almost 1 million COVID deaths, according to projections by the science analytics firm Airfinity, which created a series of vaccine supply forecasts coinciding with this week’s high-level meeting on the pandemic response.

WHO – ‘success depends on action now’

In a briefing note at the close of the Summit, the White House appeared determined to turn around such gloomy forecasts.

The White House said world leaders had “answered the President’s call and embraced a set of ambitious global targets,” including top-line targets such as:

“The leadership shown by President Biden is commendable and provides a much-needed boost to the global efforts to rapidly expand access to vaccines, scale up diagnostic testing and expand supplies of oxygen and other life-saving tools in all countries – especially the most vulnerable,” said WHO Director Dr Tedros Adhanom Ghebreyesus, in a statement issued Friday evening, but “success depends on action being taken now.”

“The commitments made at the Summit offer the promise of reaching the targets that the World Health Organization and its partners have set to vaccinate 40% of the population of all countries by the end of 2021 and 70% by the middle of next year,” he added, saying ““to quote President Biden, ‘we can do this.’”

However, to reach this year’s target, the world needs 2 billion doses for low- and lower- middle income countries “now,” Tedros stressed in his post-summit statement.

COVAX facility – Finance for vaccine purchases rather than donations

Advisors to the COVAX vaccine facility, which is supplying vaccines to low- and middle income countries, were not as upbeat.

A statement Friday by the COVAX Independent Allocation Vaccine Group (IAVG), entitled “What Needs To Change”  hardly had anything to say about the Summit at all. Rather they group expressed continuing concern that “the low supply of vaccines to COVAX” still might leave the world short of the doses needed to reach 40% vaccine target for end 2021.

“The IAVG is concerned about the 25% reduction in supply forecast for the fourth quarter of 2021. “It is also concerned about the prioritization of bilateral deals over international collaboration and solidarity, export restrictions and decisions by some countries to administer booster doses to their adult populations,” said the statement.

To accelerate distribution efficiently, the global community also needs to prioritize funding for more vaccine purchases by low-income countries – rather than relying so heavily on vaccine donations, the IAVG added:

“Donations to COVAX are an important source of vaccine supply; however, these should complement rather than replace vaccine procurement by COVAX given the high transaction burden and costs in managing these donations,” the IAVG stated, adding that purchases by NGOs should also be considered.

The statement followed on the US-European Union joint announcement that they would create a Global Vaccine Partnership that would also create a new fund to finance vaccine donations – but not outright purchases by LMICs.

🇪🇺🇺🇸 @POTUS and I share a priority: help vaccinate the world to end the pandemic.

We've just launched a 🇪🇺🇺🇸 Global Vaccination Partnership that will:

Our goal: a 70% global vaccination rate by #UNGA 202 pic.twitter.com/GdiBjDqkWQ

Additionally, the “IAVG strongly encourages high-coverage countries to swap their delivery schedules with those of COVAX so that COVAX contracts can be prioritized by manufacturers.”

And the IAVG stressed that countries which are sharing doses with COVAX to reduce/remove all earmarking and ensure the donated vaccines have an adequate remaining shelf life to allow for their use.

The White House position papers also made reference to the importance of expanding local vaccine production, and called on vaccine manufacturers and countries to expand “global and regional rpoduction of MRNA, viral vecdtor and/or protein subunit COVID-19 vaccines for low and lower-middle income countries.” But that, still falls short, some civil society groups said in the Summit aftermath.

Human Rights Watch was openly critical, saying: “by focusing more on redistributing existing supplies rather than on how to swiftly enable factories around the world to make more desperately needed Covid-19 vaccine and related products, governments at the summit missed an opportunity to take transformative action urgently needed to beat the pandemic and prepare for future threats.

“Dose sharing is helpful, but rich countries cannot donate their way out of this crisis as there simply aren’t enough shots to go around,” said Akshaya Kumar, crisis advocacy director at Human Rights Watch. “Without fixing the supply side of this problem, we’ll be stuck pushing this boulder up a hill only to watch it come crashing down once again.”

“Charity and good intensions will not end the COVID-19 pandemic,” declared the global health expert Madhukar Pai, director of McGill University’s Global Health Programs and McGill International TB Centre, in an op-ed in Forbes, on Thursday, a day after the summit’s conclusion.

“On the one hand, it was good to see President Biden show leadership in convening world leaders to galvanize action,” Pai noted, applauding Biden’s announcement of 1.1 billion in vaccine donations, including 500 million new doses. ” But on the other hand, he warned, the President’s calls upon high income countries to deliver on previous vaccine donation pledges may, or may not materialize.

“The problem with this charity-based approach is that rich nations have not delivered on what they already pledged. G7 countries have delivered only 14% of the total vaccine doses they had promised, according to the chief economist of the International Monetary Fund,” Pai noted.

On the demand side, meanwhile, The IAVG also called upon donors and countries to step up programmes addressing vaccine hesitancy, stating:

“Several programmes have been put in place to increase confidence in confidence in COVID-19 vaccines and address vaccination hesitancy.   These must be tailored to local contexts and the engagement of local communities and civil society is critical to ensuring their effectiveness.”

It also noted that some regions and/or countries are experiencing civil unrest, conflicts and natural disasters that are impeding or slowing the implementation of vaccination programmes.  “Global solidarity and cooperation are needed to ensure they are supported in such critical situations.”