Michel Sidibé, Special Envoy of the African Union and Minister of Health of Mali has high hopes that 15 African countries will have finally ratified the African Medicines Agency (AMA) Treaty in time for the 35th African Union (AU) Summit, scheduled for early 2022.

Fifteen is the magic number of countries that must ratify the treaty creating the AMA – in order to birth the agency into operational existence.

By the time of the summit, Sidibé also predicts that 30 or more countries will also have signed the framework agreement on the creation of the agency – an agreement that was first approved by the African Union in February 2019. He was speaking at a virtual session on Tuesday,

From civil society to the pharma industry, establishment of the continent-wide AMA is regarded as an important step forward that would help improve the functioning of national medicines regulatory agencies – combating fake medicines and streamlining approval of new medicines and vaccines. That, in turn, should also help reduce prices and boost access for people throughout the continent, observers predict.

However, snail-speed ratification of the treaty by the legislatures and parliaments of the AU’s 54 member states has become a major hurdle to actually opening the doors of the new agency. This is despite the strong support displayed by global health actors actors ranging from the World Health Organization, Africa Centres for Disease Control, as well as other regional drug regulatory agencies such as the European Medicines Authority.

However, Sidibé said he is confident the new agency, once it finally begins operations, can build upon the continent’s existing  expertise in pharmacovigilance – developed by  national agencies  such as the Moroccan agency for medicines and the Nigerian Agency for Foods, Drugs Administration and Control (NAFDAC).

As for concerns regarding the slow pace of country approvals of the framework agreement and formal ratification, Sidibé said the plan has been to first target a balance of countries in diverse African regions as “low-hanging fruit” – followed by others. In fact, so far most of the countries signing and then ratifying the agreemeht have been West African and/or Francophone.  But as the critical mass of ratifications is approached, momentum elsewhere is also building.

“Our strategy was to go for different regional balances… , to make sure that we can have a low hanging fruit so we can get quickly the 15 countries,” he said. “Now we are almost there. I am sure by the next meeting of the African Union, we can come and present to the leaders that we managed to have 15 countries,” he said, adding that the priority is to ensure that all African countries are soon on board.

Getting buy-in from all African countries will involve actively engaging with governments that are yet to sign and/or ratify the treaty, one by one. Top countries earmarked now for the next stage include north and west African regional leaders such as Ethiopia and Nigeria, as well as the Democratic Republic of Congo.

“We are learning from different experiences and ensuring that we are not losing time. We are making sure we bring different partners together to implement the agenda quickly,” Sidibé  added.

The Long Road to Ratification 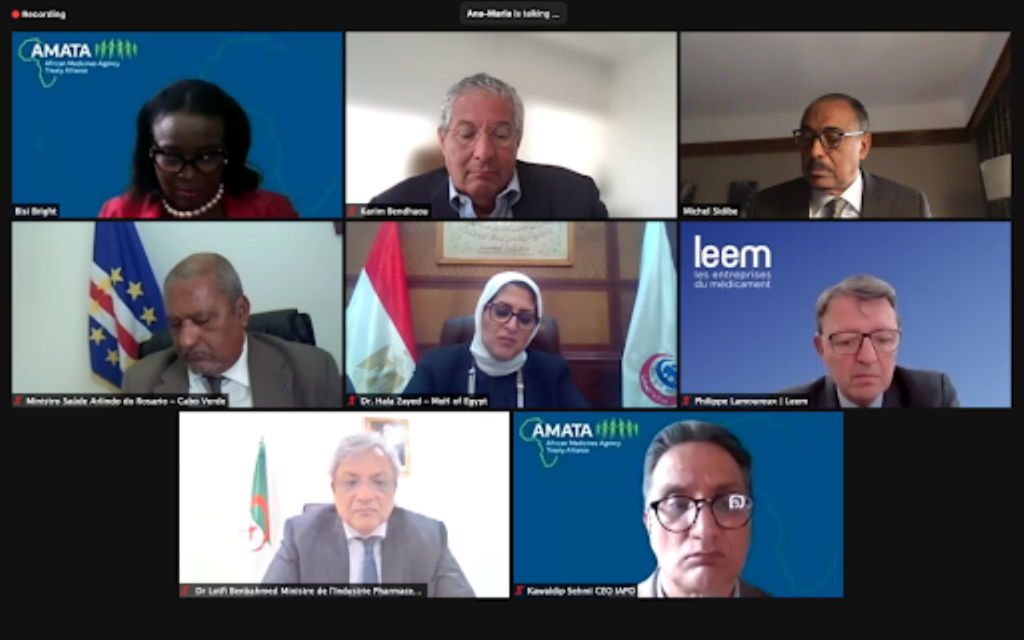 In October 2020  Health Policy Watch reported that only 18 of Africa’s 55 countries had signed the framework agreement to establish the agency, while only 5 countries – Rwanda, Mali, Burkina Faso, Ghana and Seychelles –  had actually ratified the agreement.

At the time, Africa CDC Director John Nkengasong,  told Health Policy Watch the delay in the treaty ratification was due to the COVID-19 pandemic.

“I don’t think it is because countries do not want to sign on. I think it is because of the process that is required to make them sign that treaty, and the countries are currently focusing more on COVID-19,” said Nkengasong. “I think it’s a much needed institution. If we had the AMA, it would be working very closely with the WHO and other bodies to facilitate regulatory issues on drugs to help control the COVID-19 pandemic.”

Since then,  Zimbabwe and the Seychelles have signed the AMA framework treaty, raising the total number of signatories to 20.  Guinea, Namibia and Sierra Leone have ratified the treaty, followed by Algeria this month, raising the number of countries that have fully completed the two-step approval process to nine.

In order to get across the finish line, a new  African Medicines Agency Treaty Alliance (AMATA) has also recently been created, said Kawaldip Sehmi of the International Alliance of Patients Organizations (IAPO), at Tuesday’s session.  The Alliance, led by IAPO and including patient groups, researchers and academics, and industry, will advocate for rapid AMA ratification continent wide. It will also work to establish meaningful engagement with patients, industry and other relevant parties once the Agency becomes operational.

The WHO is also actively supporting the emergence of the AMA, with its Director-General, Dr Tedros Adhanom Ghebreyesus describing the lack of strong national regulatory systems as “one of the biggest obstacles to improving access to medical products in Africa”.

WHO Regional Director in Africa, Dr Matshidiso Moeti, has also reiterated the importance of the agency, telling Health Policy Watch: “AMA is a very important platform for medicines to be available and affordable equitably, and to be of good quality so that we have both good outcomes for the money that people and countries are spending, and that we prevent problems.”

Other Benefits – International Partnerships and Support for Local Production

The AMA will also help strengthen global collaborations, including participation of African researchers and patients in clinical research trials of new medicines, especially in the area of cancer, said Emer Cooke, Executive Director of the European Medicines Agency, speaking at Tuesday’s event.

“We’re already collaborating with a number of initiatives on clinical trials with African regulators, particularly in the context of the African Vaccines Regulatory Forum. We can use forums such as this to build on the collaborative activities that take place to share our experiences and to help us to work on training and capacity building initiatives,” Cooke said.

“I think we should be heartened by the fact that there’s already good discussion and collaboration in the context of clinical trials.”

Meanwhile, Lotfi Benbahmed, minister of the pharmaceutical industry of Algeria, said the AMA can help improve the reliability of Africa’s medicines — a feat that he said requires the existence of a regional framework to fight fake drugs.

“So what we need to do is to harmonise rules and regulations, and enable countries to fight the illegal markets, and the informal markets,” Benbahmed said, who spoke alongside other African ministers of health from Algeria, the Democratic Republic of Congo, Egypt and Cape Verde. .

According to him, a similar framework can be deployed to tackle the challenge of low quality drugs on the continent from the point of production, including setting up measures to inspect and control equipment in laboratories.

At the same time, delays being encountered in the finalisation of the agency are “understandable”, said Dr Margareth Ndomondo-Sigonda, African Union Development Agency-New Partnership for Africa’s Development (AUDA-NEPAD), who highlighted the  extensive harmonisation processes that needs to be undertaken between national governments to birth the new agency.

“It takes time to get to the point where you’ve achieved regulatory harmonisation of African medicines and harmonization of regulatory standards. You have to make sure that through harmonization of these technical requirements, you know the quality standards and practice and  you build trust,”  Ndomondo-Sigonda said.

She was however hopeful that once AMA comes into force,  it will be able to deal with many outstanding issues regarding the harmonisation of Africa’s medicines landscape.