Over the past 24 hours, the world has seen the largest-ever increase in new COVID-19 infections, with most of the 106,000 cases cases occurring in just four countries, warned WHO Director General Dr Tedros Adhanom Ghebreyesus on Wednesday.

“In the last 24 hours, there have been 106,000 cases reported to WHO – the most in a single day since the outbreak began. Almost two-thirds of these cases were reported in just four countries,” said Dr Tedros at a press briefing.  He spoke just a day after the World Health Assembly (WHA) meeting of 194 member states resoundingly endorsed a plan for a more unified global response against the virus threatening health and economies.

The ‘unprecedented solidarity’ seen from member states at the WHA will be needed more than ever, he warned, as countries continue to combat the pandemic that is approaching 5 million cases worldwide.

While the WHO Director General did not cite the countries by name, Tuesday’s WHO situation report had the US as the global leader in ever-rising COVID-19 cases, posting a whopping 45,251 new cases overnight. The US was followed by the Russian Federation (9263), Brazil (7938), and Saudi Arabia (5102).

On Monday, US President Donald Trump charged WHO with failing to control the pandemic, and said he would permanently cut funding to the organization within 30 days “if the World Health Organization does not commit to major, “substantive improvements.” The US has also demanded an independent investigation of WHO.

Regarding the US demands for independent review, Dr Tedros pointed to a just-published report on WHO’s January-April Health Emergency response by an Independent Oversight Advisory Committee (IOAC), led by a former UK Department of Health Director General, Felicity Harvey.

The committee concluded that the “WHO has demonstrated leadership and has made important progress in its COVID-19 response” considering the “novel nature of this virus and persistent unknown factors.”

But the committee, including six other public health officials or senior policy advisors from Canada, India, Japan, Lebanon, India, South Africa and The United States, warned against the “rising politicization of pandemic response” saying:  “WHO cannot succeed without unified global political support during the next phases of the pandemic.

“No single Member State can hope to defeat this virus solely with the tools that exist within their own borders,” the oversight report continues. ” Yet there has been a palpable lack of global solidarity and common purpose. That is a recipe for extending and worsening the global outbreak, leaving all countries less secure. The rising politicization of pandemic response is a material impediment to defeating the virus, while it aggravates other health, social and economic impacts.”

The IOAC report also condemned what members described as “credible threats targeted against the Director-General and staff members, which have followed criticism of the Organization in the media”. Dr Tedros had previously acknowledged that he has received death threats – although the report was the first formal reference to the issue.

With regards to the United States call to review WHO’s performance, the IOAC warned, that “conducting such a review during the heat of the response, even in a limited manner, could disrupt WHO’s ability to respond effectively”. The Committee suggested, however, that it “may be useful, at an appropriate time, to independently assess the Organization’s performance during this response and identify lessons for the future”.

Such a review, in fact, was also mandated by a European Union-led resolution on COVID-19 response, approved by the WHA only yesterday,

The carefully-crafted resolution leaves some wiggle room in the pace at which WHO advances with further review. It calls for WHO to “initiate, at the earliest appropriate moment, and in consultation with Member States, a stepwise process of impartial, independent and comprehensive evaluation, including using existing mechanisms, as appropriate, to review experience gained and lessons learned from the WHO-coordinated international health response to COVID-19.”

However, with the threat of a complete cessation of US funding hanging over the future, the Director General had already indicated he would immediately act to advance further evaluation.

US Funding “Mostly Goes to Emergencies”

Tedros, who otherwise enjoyed resounding support at the Assembly, appeared unphased by the US threats, as such, which critics widely attributed as an attempt by Trump to shift criticism of his own administration’s performance in the pandemic response.

However the WHO Director General expressed concerns about WHO’s future budget stability, wryly noting that funding for the Organization’s – charged with safeguarding the world – is comparable to that of an “average sized hospital”.  Only a precarious 20% of the budget is predictable “assessed” contributions by member states – while the rest is comprised of “voluntary contributions” by countries and donors, which are often earmarked for specific activities.

US funding for 2020-2021 has already declined sharply, as a result of cuts in allocations by Washington, and now comprises only about 11% of the Organization’s planned budget of about US$ 4.9 billion.

But US funding still accounts for about the single “greatest proportion of funding” earmarked for the WHO’s Emergencies Program, which is spearheading the COVID-19 response, said Executive Director of WHO’s Health Emergencies Programme Mike Ryan.

In the new 2020-21 budget cycle, US contributions were expected to total some $553 million, including assessed contributions of 237 million and the remainder in earmarked funding for specific programmes. 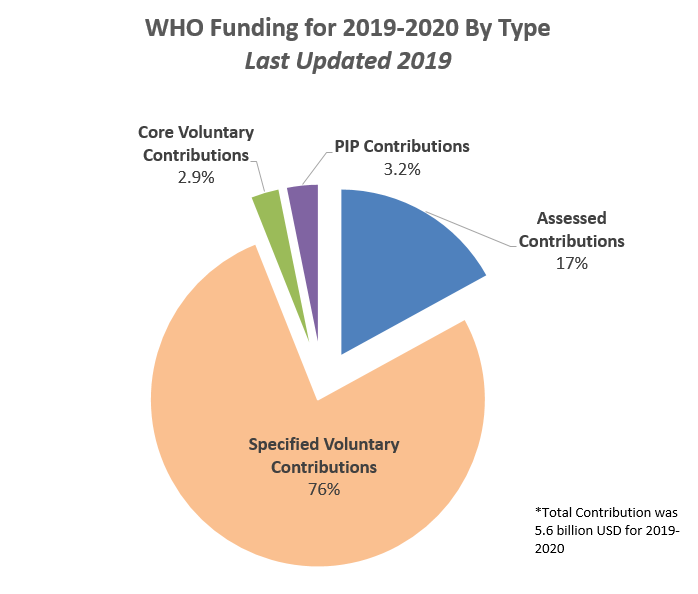 However, ‘it’s not about having more money,” he added. “The amount of money is not the problem. The quality of it is also poor. We need to improve the quality of funding.”

WHO funding has witnessed a ‘complete reversal’ in the past 40 decades, said Dr. Tedros, as about 80% of WHO’s funding came from ‘assessed contributions’, or so-called ‘flexible funding’. Since then, flexible funding has dropped, accounting for 20% of the WHO’s budget. In other words, 80% of WHO’s funding relies on voluntary contributions, an unstable source of money.

We need to work on improving the WHO’s funding base to ensure continued flow of life-saving funds for frontline health services in some of the most difficult places in the world, said Ryan. To ensure that funds are still flowing, we will “obviously” have to work with other partners, he said.

The WHO is ‘looking into resolving these financing challenges’, said Dr. Tedros –  especially in light of US President Trump’s blunt ultimatum to permanently suspend US funding, which accounts for almost a 6.5% of WHO’s budget for 2020-2021.

Dr. Tedros praised the WHA-approved resolution as a clear roadmap for confronting the pandemic:

“The resolution sets out a clear roadmap of the critical activities and actions that must be taken to sustain and accelerate the response at the national and international levels,” he said. “If implemented, this would ensure a more coherent, coordinated and fairer response that saves both lives and livelihoods.”